Let’s think about a few things right now. Specifically, what gets us started (Inspiration), what gets us moving (Motivation), and what keeps us going/progressing (Discipline).

When you first came up with the idea of running, what made you consider it or want to start doing it? More than likely, you saw something or someone, and thought: “Wow. I wonder if I could too…?”. Or perhaps that person was your friend/aquaintance/coworker who used to be inactive, unhealthy, overweight, or whatever, but in the shadows of time, put forth the effort and the work to transform themselves and are now fit, healthy, active, running races, smashing PR’s, maybe even qualifying for and running Boston! So now you think, “I’m not far off from where they used to be. If they can do it, so can I.”. Whatever the circumstances surrounding that very first thought that flickered through your mind, you were inspired to make a change, to set a goal, and to start moving forward.

Once you decided what it is you wished to do, perhaps to run a mile, or a 5K, 10K, half marathon, or full marathon, you searched through and selected a training plan; some set schedule of activities to prepare your body for what you are now asking of it to do. In doing so, perhaps you selected a particular race or future event in which to base your training schedule off of. This will give you a specific goal to work towards and morivate you to adhere to the structure and timeline needed to actually achieve this goal.

But inspiration and motivation will only get you so far. You completed that goal. Now what? If you’re like most of us, once you started running, you fell in love with it. And now, instead of just being someone who runs, you actually consider yourself a “runner”. So you set another goal, you plan another training program, and you keep chasing another goal. Sometimes “life” gets in the way and things don’t always go according to plan. But you’re a runner now and runners simply do not quit. So you keep running, you keep trying, and you keep completing every event you sign up for. Inspiration doesn’t always shine and motivation isn’t always enough. When the going gets tough, when “life” won’t ease up, and your goals seem so far out of reach, what is it that is going to keep you on track and prevent you from giving up, losing progress, or becoming stuck in that mediocre middle ground of “not my best, but not my worst” result on raceday?

When it’s dark outside, when it’s cold or it’s raining. When you’re sore, when you’re tired, when you have so much to do. When you haven’t gotten much sleep and you still have a full day of work or family responsibilities ahead of you, yet that alarm goes off at “WTFo’Clock” to harshly awaken you and remind you that you set this goal for a reason; you committed yourself to a dream that will neither earn nor realize itself. In these brutally honest moments, inspiration will not help you and motivation will not move you, but if you choose discipline, you will get up, you will show up, and you will get things done. It’s not all sunshine and rainbows. Sometimes it’s ugly, early, and tired…but these are the times when getting up and getting it done forges in us the spirit and drive and good, strong habits that will continue to propel us forward, moving us ever more closer to realizing our dream(s).

“Life” has continued to drag me down relentlessly since my parents crash, culminating with the driver of the truck that struck them being charged with “high level ovi” following the results of his post-accident drug test which revealed a large amount of cocaine in his system at the time…only to watch the State of Ohio drop the ball (and the charges), allowing this man to walk out of the courtroom with no consequences for his illegal and reckless behavior. Like many things in regards to this tragedy, it’s not fair and it doesn’t make sense. And while my sister and I continue to fight for justice in this case, as well as, settle the affairs and liquidate the estate of our parents, I have (more frequently than I care to admit) caved under the pressure and emotions of it all. My training has continued to be (fairly) regular but not always structured, intense, or consistent. I have gotten into a good routine of strength training but have slacked when it comes to regular long runs and speed training has been nearly nonexistent. Then there was a 2-3 week stretch of intense pain in my lower left leg and foot which forced me to back off even more, just when my mind was starting to get back in the game. I was still able to run a 2:12 half marathon as a long training run on April 8th, which gave me hope that I could still salvage my training and preserve my ability to run a sub-2 hour half marathon in Pittsburgh; possibly even PR the race. But as raceday got closer, the events of the criminal case and the clearing out the belongings in my parents house consumed much of our time and attention…and the disappointment and sadness of it all weighed heavily upom me. I gave in to it much more than I care to admit. The day the State of Ohio blatantly refused to fight for justice, I truely hit rock bottom. I can’t even tell you what I did in the days that followed…I know that it involved alot of whiskey, tears, and sleep. But when I opened my eyes the following week I realized that things can not possibly get any worse than this…so they have to get better now, right? And, just like that, I started to feel better. My race in Pittsburgh was now just 12 days away; not nearly enough time to make any effective training moves. Then it became increasingly clear that Shep was not going to be able to run with me as he was still caring for a nuisance calf strain. (With his BQ attempt coming up at the Cleveland Marathon on May 20th, the risk of running Pittsburgh simply does not make sense.) So I reached out to my friend Cherish. She and I have a unique “history” together with the past several years of the Pittsburgh Marathon and Half Marathon. Turns out, she was struggling with the desire to even run the race this year at all, so (once again) we made a perfect match. The goal was simply to finish…and have a fantastic and fun time along the way; and we were 💯 successful! 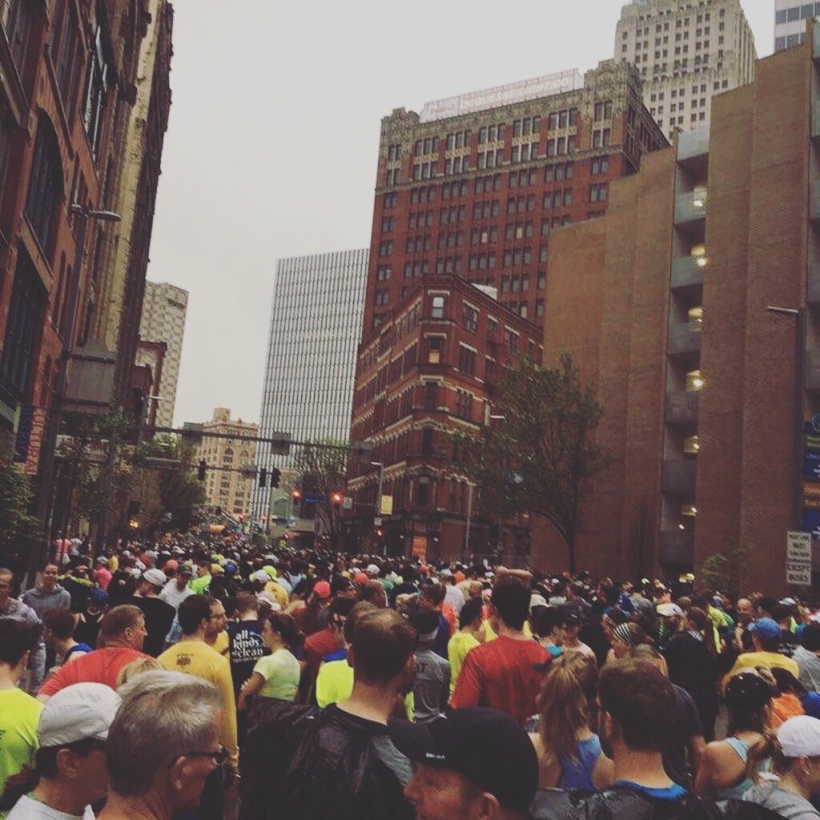 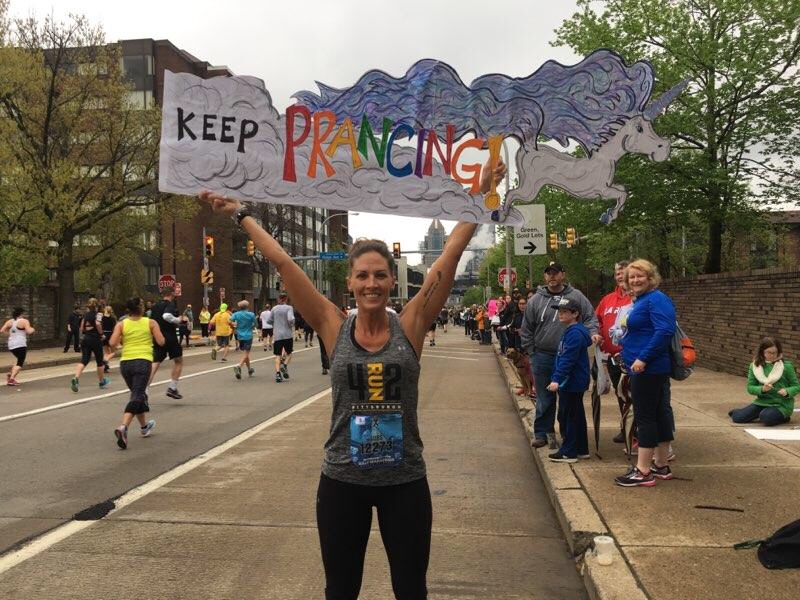 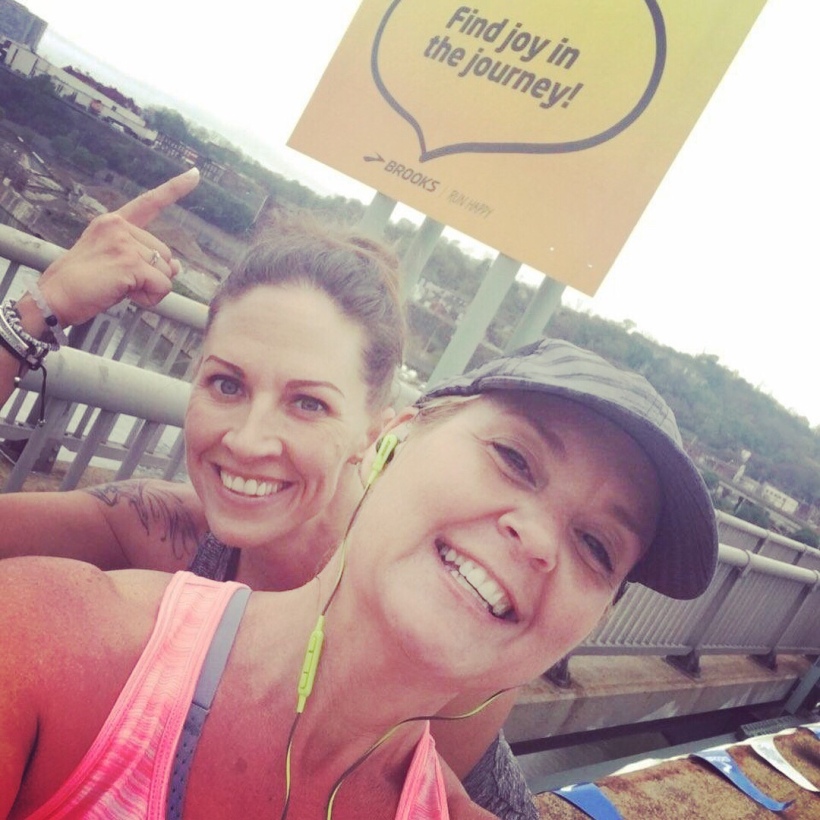 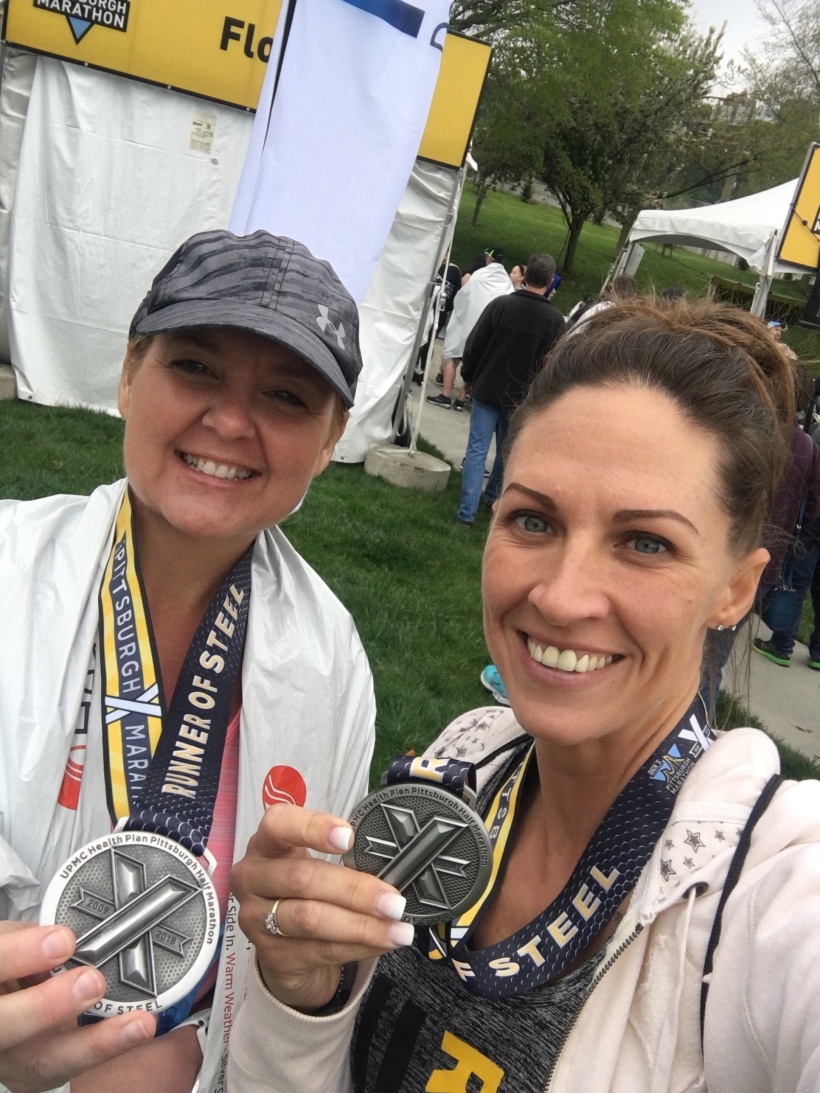 While the end result (2:09:15) was far from either of our best, it was, also, far from our worst. And in this “mediocre middle ground” performance, we succeeded in, once again, discovering our LOVE OF THE RUN!

So, as this fun, inspiring, and motivating day comes to a close, my mind drifts back to my ultimate goal of qualifying for Boston someday. And, while I am currently so very far away from this elusive “unicorn” of a goal, I already realize that inspiration and motivation are not nearly enough to get me there. This will require discipline; and alot of it. So, once again, I prepare my gear and set out my shoes…and when my alarm goes off at “WTF o’Clock”, I will lace back up and I will run. I will do whatever it takes to keep moving forward, one step at a time.

I will choose discipline.

This site uses Akismet to reduce spam. Learn how your comment data is processed.